Will Ukrainian Autocephaly Trigger A War With Russia?

Will Ukrainian Autocephaly Trigger A War With Russia? 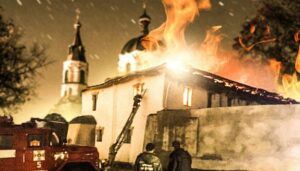 As Pat. Bartholomew prepares to visit Ukraine this coming August the clouds of an approaching war are gathering over Ukraine.  The trigger is very likely to be the Autocephaly granted to the 25% of the Orthodox faithful by the Constantinople Patriarchate, which has caused many episodes of violence all over the country for the past two years. (Greek Translation and supporting news below)

Helleniscope’s readers know my keen interest in the news regarding Ukrainian Orthodoxy and particularly the Autocephaly issue that caused a Schism in World Orthodoxy.  Moscow Patriarch Kirill and Patriarch Bartholomew of Constantinople have already exchanged several letters and offered a multitude of public statements attacking each other’s positions.  At the same time, there is a 6-year stalemate after the 2015 Minsk Agreements on how to apply relative autonomy to the Donbas region (mostly Russophone Eastern Ukraine – notably inhabited by some of our fellow Greeks, some in very ancient, almost 3,000 yr. old communities…)

My interest in Ukraine predates the issue of Autocephaly and started with reading the “Clash of Civilizations” by Samuel Huntington (1996), a truly prophetic book, on page 37 of which the events we all witnessed since 2014 in Ukraine are described in great detail. In the last 20 years, this book has become the bible of “deep state” circles and is guiding major decisions in the State Dept. and the CIA.  I have said many times that in this particular case “deep state” is acting in accordance (should we say completely “choreographed” coordination?) with the financial “movers and shakers” of Wall Street.  If we put aside elaborate geopolitical analyses, the human motives and instincts are always simple, namely “greed”, pure unadulterated greed. Russia, including Siberia and the Arctic, contains the last unexplored, massive treasure trove of the planet.  Every imaginable mineral (from gold and uranium to rare earth minerals and hydrocarbons) is there for the taking in huge amounts.

Why then not make a deal with Russia to explore it, you may ask… First, because they do not want “deals” with Putin – they want it “for free”: Putin offered deals (like the one to Rex Tillerson of Exxon Mobil for Arctic exploration) but the “deep state” thwarted it and forced ExxonMobil to back off taking a loss after they had installed a huge platform in the Arctic Sea…  They (the “deep state” and their allies in the financial world) had it all planned out when they banked on drunkard Boris Yeltsin – but Putin spoiled their plans…  Secondly, they understand that along with taking over Russia comes complete domination and control of the whole planet and the whole humanity…

In this context, recent news (we list 4 important pieces below) shows that we are fast approaching the threshold where the Ukraine conflict becomes a war:

This short note does not pretend to be a full analysis of the geopolitics of Ukraine. But it can serve as a warning to those (Karloutsos and Bartholomew) who put politics over Orthodoxy and already have blood in their hands.  Should I remind everyone that the First World War was triggered by the assassination of Archduke Franz Ferdinand of Austria by the Bosnian Serb nationalist Gavrilo Princip, who had been supported by a nationalist organization in Serbia? It takes just a small but sensitive “side issue” for a major war to happen when the rest of the conditions are ripe…

Do Pat. Bartholomew and Karloutsos want the future historian to write that they provided the trigger for a major war with Russia that could probably lead to the loss of millions of lives and may even go a step further and cause a World War III?