In my last analysis, recently published in Liberal newspaper, I introduced “High Strategy” initial conclusions on the intense conflict that is taking place in Nagorno – Karabakh since September 27. 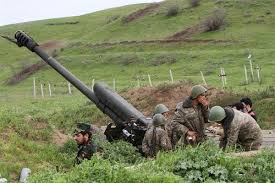 In fact, the conclusions presented aimed to highlight the geopolitical foundation stones that define or should define the long-standing competition between Greece and Turkey. The conclusions made early on operational issues and tactics as well are quite a risky business because the fog of the warfare in combination with deliberate misinformation (a part of information warfare) can lead to a false picture of the whole issue. However, the adoption of correct and logical conclusions in another operational environment as well as their successful inclusion in operational doctrine of another army is even more dangerous.  To date, the controversial journalist information lead to the following conclusions;

Armenian armed forces suffered an operational surprise due to the scale and the intensity of the combined – from air and land- Azeri attack. Since the Armenian predominance and the ceasefire agreement in 1993 it was the events on border locations of small or large scale, either random or planned, with mutual responsibility that took place often. The recent action seems to target the complete destruction of the Nagorno – Karabakh defense forces and the reconquer of a considerable part of it. In case of failure of those ambitious but not unachievable goals, the target is the acquirement of a tactic advantage in combination with the fear or the repercussions of an attrition war which are going to force Yerevan to accept considerable territorial unit losses.

We should point out that the military operations are not carried out on the borderline between Armenia and Azerbaijan, but on the enclave of the Nagorno – Karabakh. Despite the overall actions and accusations against each other, the two countries are not in a state of war, officially. It is a pretty similar situation to the one of Cyprus in 1974 (when it comes to the way of intervention and the hostilities taking place).

Both sides are aiming to eliminate the battles on the disputed area.

It seems, though, that the Azeri military goals are yet to be realized. Despite the initial surprise made on their rivals, the Azeri ambitions for another “Blitzkrieg” have been denied. Nevertheless, the Azeris are entitled to celebrate for the reconquer of a part of Nagorno- Karabakh (approx.  8-10%) that led to a winner vibe. Respectively, the Armenians can feel satisfaction, for the moment, managing to have control over significant civilian areas and land of strategic importance, despite the tension of the rival attack. To date, the Azeris enjoy some small land conquers on the north part of the enclave and more important wins in the south (on the borders with Iran), where the soil is friendlier, wider and open to attacking operations. 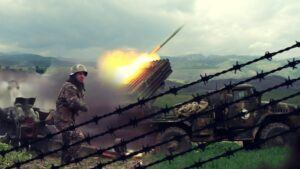 Today, it seems that the Azeri attack has been prevented since the Armenians have withdrawn to more powerful defense lines (in mountain areas with quite a dense vegetation). That is a tactic implemented by Armenians in the past as well. Afterwards, they would conduct counterattacks that would totally destroy their enemies. The Armenian withdrawal have led the Azeri armed forces to remain in approx. 20-25 km distance from the vital route (Lachin corridor) that connects the capital of Nagorno – Karabakh, Stepanakert with Armenia. Such development is definitely a concern for the general staffs in Yerevan. We should, also, bear in mind that the conflict zone covers a width of 7,500 square kilometers (which equals to a square with 85 km on the side).

What we should recognize is that the Azeris managed to appear as the predominant power in the conflict, on an international level. Moreover, they appear to obtain special lethal precision air strikes skills by a considerable Unmanned Aerial Vehicle (UAV) fleet of various types and production (e.g. Turkish Bayraktars TB2, Israeli Harops, Skystrikers and Orbiters 1K). Massive videos depicting strikes are featuring on the international press as a part of the “information warfare” between the two enemies. Azeris clearly prevail in the air battles, where UAVs are mostly used, while the presence of helicopters and manned aircrafts is minimum or none at all. Armenians failed to properly evaluate the significant enhancement of the unmanned aircraft systems by Baku and the risks allocated for their own armed forces, so they can develop any reaction plans. They rather stayed focused on the Soviet dogmas of massive artillery fires, tank destruction areas by anti-tank weapon systems, followed by prepared tank counterattacks, upon which they based their defense position and plans. The partial dislocation of the air defense rendered their heavy weapon systems, otherwise protected on land strikes, vulnerable for attacks by air and forward movements became too risky.  The wide use of Azeri UAVs in heavy weapon system destruction missions were successful and, after a cost-benefit analysis, the former are way less costly than aircrafts and helicopters. Apart from the ability to strike targets on land, UAVs provide features for artillery fires execution and direct information technology about the tactic picture in administration stations and they can zoom on any spot needed.

The Azeri attack began with the implementation of the main Western dogma, setting the suppression of the enemy air defense as a priority. The quite obsolete Armenian anti-aircraft weapon systems moving forward in Nagorno – Karabakh (mainly SA-8/9K33 OSA and SA-6/2K12 KUB) suffered major strikes from UAVs.  The destruction of S-300 system launchers and radars is still to be confirmed, but it is considered possible since they tend to face inherent difficulties when it comes to dealing with modern tactics against air defense which intensify by the lack of a unified air defense network and proper education.

The displacement of S-300 on Nagorno- Karabakh land is considered impossible as well as their targeting on Armenian soil is seen as overly risky. As a matter of fact, the Armenian air defense has suffered significant losses, at least on the enclave of Nagorno- Karabakh. As a result the Azeri UAVs easily stroked various targets within the next days.

In consequence, unavoidable concerns and questions about the capability of the Soviet air defense systems of 1970s-1980s and 1990s to cope with modern aircrafts, UAVs and, especially, with special munition and suppression of enemy air defense (SEAD) tactics arose.

Furthermore, it was proved, once again, that the density of air defense systems is insufficient, unless there is proper integration of weapons, sensors and command posts as well as a balanced and solid development of systems with different capabilities and features.

Of course, we should not forget factors of personnel training and proper implementation of an effective regular dogma of MANPAD use that are of paramount importance.

Azeri UAVs moved on conducting ‘isolation of battlefield’ missions, without any serious risk of being shot down by another air vehicle or by ground firing. After the suppression of the Armenian air defense, they intensively shot down the armored units that were moving forwards to reinforce the battlefield as well as the developed artillery units. Those missions were quite successful since a great number of Armenian tanks and vehicles were destroyed or partially damaged. Turkish-made UAVs proved to be very effective, despite the fact that they are equipped with guided munition of relatively small explosive power (MAM-C or MAM-L Smart Micro Munitions). Shooting is, usually, conducted from a point that is high enough, so its visual tracking is impossible as well as their engagement with low-cost media such as machine guns or firearms or even Manpads (SA-10/Strella). However, the most capable air defence systems, short or medium range with active radar guidance risk being directly destroyed if they are targeted by specified ‘suicidal mission’ (kamikaze) UAVs radars. In consequence, it was not the armored vehicles that were obsolete and meant to collapse in the fight against UAVs (they, however, continue to sufficiently protect people riding them), but Armenians’ incapability to offer a sufficient air defense coverage to the always vulnerable over time armored units, reserve movements and gatherings of artillery units. The armed forces in many countries are concerned by this kind of vulnerability, because the constantly dropping cost of UAVs in coordination to their growing capabilities makes them widely used.

Nevertheless, Azeri tanks also suffered fatal plights when moving in uncovered areas without the proper custody of other units and became the target of wisely hidden anti-tank weapons.  The Azeri attack featured a totally efficient use of UAVs, but a low quality implementation of tactics on the battlefield. The latter comes as a result of low level education and lack of exploitation of the available weapon systems and utilization or the respective tactical doctrines. The Azeri success story could be compared to the respective one of the Arabs at the start, in the Yom Kippur war in 1973, who eventually did not manage to value this success in operational and strategic level. The political goal of the war was, however, achieved for Cairo since Israel and Egypt moved to a peace treaty agreeing upon the return of the occupied land on Sinai to the latter. The success of the respective Azeri assault is to be seen in the future.

In addition, the two opponents are equipped with a limited number of ground to ground ballistic missiles. Those systems are properly made for shooting down strategic targets in the rear area of the enemy (a range of around 350 kilometers), but they are used as psychological weapons against urban targets as well. To date, the use of such systems by both sides is noticed to be limited.

Summarizing, we can claim that both opponents are equipped with weapon systems that overcome their capabilities of conducting efficient modern joint operations based on high skilled professional personnel. The latter is not relevant to any, personal or unit combat capabilities and the decisiveness of fighters and, especially, Armenians.

The dynamic of the Azeri attack seems to be, currently, wearing out without prospects of any decisive Armenian counter attack. The war will turn into an attrition warfare with Azeri people prevailing when it comes to equipment and Armenians fighting pro Deo et patria. It is, undoubtedly an unstable situation with a lot of internal and external factors that can instantly trigger any fragile possible truce. Despite both sides’ significant losses, the rivalries’ dynamic has still suffered those detrimental losses that would lead to a mutually painful compromise, while there are still voices calling an absolute prevalence on the battlefields possible.

Apart from any conclusion deriving from the analysis of available information, external observers and forces directly interested should carefully focus on the objective evaluation of the conflicts, even if this leads to risky missions of observers into the battlefields.