In 1962, when people were preparing for war again due to the Cuban Crisis, mass demonstrations took place at Trafalgar Square and London’s Whitehall, where the photo was also taken.
One man stood out from the crowd of thousands trying to get to Downing Street 10 — the prime minister’s residence.
Police formed a chain to stop him and prevent the crowd. So he made his political protest sitting against them.
What was the slogan on the banner? Who was the man? What happened to him later? His protest became front page, but remains anonymous, completely trapped in his own revolution.
The photo is by British photo reporter Don McCullin. 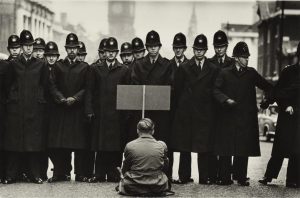