Just as Amnesty International and organizations of its ilk are strenuously trying to make Zionism illegitimate, turn it into a dirty word, much of the Arab world is coming to grips with it. 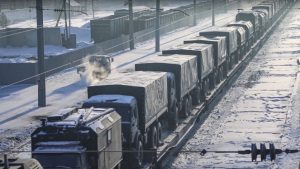 When Amnesty International declared Israel an apartheid state last month, its agenda was clear: Turn the Jewish state into a pariah, a country that will be shunned by the international community.

How ironic it was, therefore, that just a couple of weeks later, Israel – represented by Prime Minister Naftali Bennett – turned up as one of the main actors on the international stage mediating between Ukraine and Russia in one of the most severe global crises since World War II.

And now this: Four Arab foreign ministers were to gather in Israel Sunday evening along with US Secretary of State Antony Blinken and Foreign Minister Yair Lapid for an unprecedented summit.

That the summit is taking place in Israel rather than, say, Sharm e-Sheikh, the traditional venue for these types of meetings, is one thing. But that it is taking place in Sde Boker, the post-prime-ministerial residence of David Ben-Gurion, Israel’s founding father and someone who can be rightly termed Mr. Zionism, is nothing less than stunning and a powerful message.

Just as Amnesty International and organizations of its ilk are strenuously trying to make Zionism illegitimate and turn it into a dirty word, much of the Arab world is coming to grips with it. Not, of course, because of any great sympathy for what it represents, but rather because of the recognition that in a hate-filled region full of malevolent actors with medieval ideologies, Israel is a relatively benign actor.

Compared with Iran, moreover, it is downright benevolent. And it is this well-disposed – and powerful – actor with whom these Arab states realize it is in their interests to cooperate.

Noticeable by their absence, however, are Saudi Arabia itself, Jordan, the Palestinian Authority and Sudan.

Saudi Arabia still has not screwed up the courage needed to take its relationship and cooperation with Israel to the public level. But it will eventually, and attacks like the one by the Houthis on the Aramco refinery in Jeddah on Friday will only speed up that process.

Jordan is walking a tightrope between its interest in joining this moderate Sunni-Israel camp on the ground floor and the anti-Israel sentiments of the Jordanian population – the majority of whom are Palestinian – which King Abdullah has been all too willing to let seethe over the years. In a sign of domestic instability, the Jordanians have arrested dozens of people in the last couple of weeks, and joining the meeting in the Negev at this time might just lead to further domestic agitation.

Sudan, the fourth of the Abraham Accords states – along with the UAE, Bahrain and Morocco – is still roiled by its own domestic political crisis and is in no position to take part in a trailblazing Mideast summit like the one in the Negev at this time.

THE PA, as always, is just too weak and blinded by its own narrative of victimhood to realize that this alliance presents it, as well, with tremendous opportunities. So PA President Mahmoud Abbas will stew in his own bitterness, anger and frustration, sufficing with a visit on Monday from Blinken and Jordan’s King Abdullah, who are trying to ensure that violence in the West Bank does not boil over. In the meantime, the proverbial caravan moves on.

And the wagons in this particular caravan are going to the Negev, where they will circle to defend against a common enemy and mutual threat: Iran.

In 2015, the last time the US moved forward on an Iran nuclear deal, Israel took the public lead in fighting it, with then-prime minister Benjamin Netanyahu going toe-to-toe with US president Barack Obama, who wanted the deal then as bad as President Joe Biden’s top Iran negotiator, Rob Malley, wants it today.

Back then, the Sunni Arab world stood in the background and silently cheered, hoping that Netanyahu’s in-your-face approach would work, but was unwilling to publicly join him in the fight.

This time around, Israel is not taking nearly as public a stand against the deal as it did before. Yet Blinken is sure to hear from all five foreign ministers at Sde Boker on Monday their deep disappointment and misgivings that Washington is again racing ahead with the deal, ignoring the better counsel of those who will be most affected by it. This time, it will not be Israel speaking alone against the deal, but Israel speaking together with Egypt, the UAE, Morocco and Bahrain, standing in for Saudi Arabia.

Will it convince the Americans? Highly unlikely.

But it may shift the conversation from focusing on whether the deal will knock Iran off the nuclear track – the US and European powers believe it will, Israel and the Arab states represented in the Negev Summit believe it will not – to whether it will embolden Iran’s destabilizing efforts in the region, something Israel, Egypt, Morocco and some of the Gulf states believe with complete certainty will happen.

The Gulf states are speaking more openly now against the deal because the threats they face from Iran are not only a possible nuclear threat a few years down the line, but rather the very real and immediate attacks they are experiencing today from Iran’s proxies.

Houthi attacks on Saudi, UAE and Bahrain targets can only be expected to increase once an Iranian nuclear deal is signed and – as a result of that deal – money pours into Iran, enabling Tehran to better fund its proxies. Egypt and Morocco stand to suffer from attacks by Iranian proxies as well, to say nothing of Israel.

Then there is the nuclear component.

“Israel will do anything we think is needed to stop the Iranian nuclear program,” Lapid warned Sunday at a press conference in Jerusalem alongside Blinken.

Those words are by no means new, and Israeli government officials have been repeating them now for nearly three decades.

What is new, however, is the message being sent by the participation of central Arab countries at the Negev Summit: participation that says they might help Israel do what it believes it must to stop Iran’s nuclear march.

Foreign reports of the downing of two Iranian drones outside Israel’s borders last month, and an attack soon thereafter on a drone warehouse in Iran attributed to Israel, indicate that this help may already be something that is being rendered.