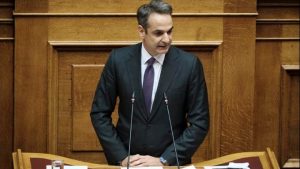 Next week the allowance of 200 euros will be disbursed, for our weakest fellow citizens, while by the end of the month – as we have committed ourselves and taking into account the recommendations of experts – the government will announce and implement a new significant increase in the minimum wage, which will be implemented on May 1, 2022.” This was stressed by Prime Minister Kyriakos Mitsotakis yesterday in Parliament during his speech in the context of the debate on the “Jobs Again” bill, where he described unemployment as the biggest  threat to society.