The Israeli government is accusing Iran of environmental terrorism over the historic oil disaster unfolding along its Mediterranean coast line. At this point, nearly 100 tons of tar and contaminated material have been scraped off the country’s shores since cleanup efforts began on the 21st of February. In the ensuing investigation the original culprit has since been identified by authorities as a pirate-owned Libyan oil tanker carrying stolen cargo from Iran to Syria. 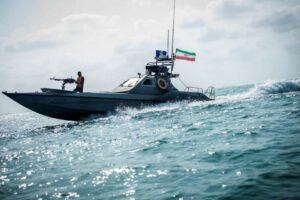 The ship in question sailed through the Persian Gulf and the Red Sea without any radio contact, turning off her tracking devices while transiting the Suez Canal but then reactivating them once across. The ship’s transponder was off before entering Israeli waters. Clearly, such behavior is surreptitious.

Israel’s Environmental Ministry suspects that once in these waters, the crew – under orders from Iran – deliberately dumped oil into the sea in an effort to inflict environmental and economic harm. However, the Ministry’s Director of the National Marine Protection Division Rani Amir believes that the incident may be one of incompetence rather than malice. He asserts that the spill could be an accident, the result of  illegal smuggling of oil from Iran to Syria gone wrong. The Israeli Defense Ministry reportedly so far did not confirm the terrorist nature of the oil dump, anxious not to escalate the already-volatile situation between Jerusalem and Teheran.

In either case, the Emerald reactivated her tracking device after reaching Syria on February 3, but did report her destination. This leaves a gap between Feb. 1-3 where the ship was effectively quiet.

Ties to Iran are investigated by Israel, the U.S., and the Gulf states, to mention a few. If a link exists it will have serious implications for regional security. Gulf State Analytics Senior Advisor, Dr. Theodore Karasik, told Forbes that the Israeli government’s calling the oil damage as “eco-terrorism” is highly significant. This definition would mean that the act was not only tactical but also just bumps up against the CWC, or chemical weapons convention. Dr. Karasik authored Toxic Warfare, a RAND Corporation monograph which examined the use of hazardous materials and industrial materials as a combat strategy.

With the ongoing normalization of relations between Israel and its Arab neighbors, Iran feels threatened by this balance of power and has committed to hostilities, and the attack should be viewed in this context. They were responsible for the attack on a ship that was transiting the Gulf of Oman, as well as launching missiles in and around Iraq. “This oil attack, if it is indeed one, is part of an overall campaign,” says Dr. Karasik.

Ambassador Adam Ereli, former U.S. ambassador to Bahrain, said: “I don’t see any reason to doubt the Israeli government’s conclusion that Iran bears responsibility for this latest violation of international norms. It is fully consistent with a well-established pattern of hostile and reckless acts by the Islamic Republic. Unfortunately, this kind of behavior will continue until and unless the international community imposes a sufficiently high cost on Iran for its outrages.”

There is still a great deal of ‘fog of war’ here. If the Israeli information is true, the radio silence by the Libyan, Panama-flagged ship, is a dead giveaway; sailing without the radio ID signal in the Persian Gulf, one of the busiest maritime arteries in the world, and in the sensitive zone offshore Israel, suggests oil smuggling at the least, and possibly more sinister activities.

More needs to be done to ascertain the intent and the actions of the ship throughout its travels. The chemical analysis of oil will be crucial to establish the pollutants’ provenance, and the captain and crew are also the key for intelligence to establish the planning and intent of the act.

Countries, including Egypt, France, the United States, and Greece, among others, should cooperate in investigating this potential attack. When all the facts are in place (including who authorized the smuggling or gave the order to pollute), then the aggrieved parties can take action. If this was indeed terrorism, then the Middle Eastern powers and their allies, including the United States, should act decisively so that such attacks – approaching the use of chemical weapons of mass destruction- will not be repeated.

It is time for the U.S., the EU and the rest of the world to see Iran for what it is: a rogue, terrorism-sponsoring, anti-status-quo, power. Teheran is endangering the Middle East, international commerce, maritime routes, and global security as a whole.

With Assistance from Joshua Geller and Alexandra Perouansky