Nationality Rooms Program at the University of Pittsburgh – March 2021 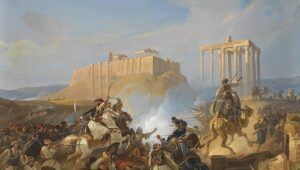 A classic times Greek philosopher has once stated that a nation which forgets its history, is a nation without a future. This significant truth acquires even greater importance in the case of nations with such rich historical depth dating since 4000 years ago. This span of time is characterized by many noble principles including empathy for the human being, but primarily by the love for freedom. Throughout this era we witness a frequent manifestation of this heartfelt objective always at great cost of human losses and destruction by barbarous invaders.
It is in this perspective and having suffered four hundred years of brutal occupation, the Greek nation has risen 200 hundred years ago against the Ottoman occupiers, to create the modern Greek state after almost ten years of bloody and extremely violent revolt. It is no surprise that the slogan of the insurgents was Freedom or Death. And many were those who sacrificed their lives and that of their families truly attached to their revolutionary oath. This uneven struggle has moved many friends of the Greek nation, known as the philellens. Many Americans chose to join the struggle and many among them gave their lives to this noble goal alongside the Greek freedom fighters. And they certainly contributed to the successful outcome of this gigantic and heroic endeavor. The example set by those heroes inspired other Balkan Nations who eventually started seeking their liberation from the Ottoman yoke.
Thus, it is with great pride that the Greek Nation reminiscent of its glorious struggle for freedom and national emancipation is celebrating the Revolution  which started 200 years ago, is sharing their rightful joy with the friendly American nation who generously supported their cause and later received them with hospitality in their quest for a better life in the New World. Pittsburg figures high in this action and the Greek Americans proudly share this memorable celebration of freedom which serves as a beacon to all progressive Nations in the world. Long live the Greek American friendship!